During the academic year 1939-1940, when he was about 58 years old, Stravinsky delivered the Charles Eliot Norton Lectures at Harvard University. Speaking in French, (an English translation was published in 1947 by Arthur Knodel)

he began by saying: “I cannot conceal from you how happy I am to be speaking for the first time to an audience that is willing to take the trouble of listening and learning before judging.” These lectures appeared with the name of Poetics of Music in the Form of Six Lessons

, on which Stravinsky deals with different topics like: the phenomenon of music, the composition of music, musical typology, the avatars of Russian music, and the performance of music. The following paragraphs are a collection of a few reading highlights we gathered on Stravinky’s views on composition. They are presented here in a different order than they appear in the book, and we also added subtitles in order to make the reading more organized, as they are as we just mentioned, fragments of some of Stravinsky’s thoughts.

There is never any dispute when the listener takes pleasure in the work he hears. The least informed of music-lovers readily clings to the periphery of a work; it pleases him for reasons that are most often entirely foreign to the essence of music. This pleasure is enough for him and calls for no justification. But if it happens that the music displeases him, our music-lover will ask you for an explanation of his discomfiture. He will demand to explain something that is in its essence ineffable.

Function justifies an organ, no matter how strange the organ may appear in the eyes of those who are not accustomed to see it functioning. It is through the unhampered play of its functions, then, that a work is revealed and justified. We are free to accept or reject this play, but no one has the right to question the fact of its existence. To judge, dispute, and criticize the principle of speculative volition which is at the origin of all creation is thus manifestly useless. In the pure state, music is free speculation.

Most music-lovers believe that what sets the composer’s creative imagination in motion is a certain emotive disturbance generally designated by the name of inspiration. I have no thought of denying to inspiration the outstanding role that has developed upon it in the generative process we are studying; I simply maintain that inspiration is in no way a prescribed condition of the creative act, but rather a manifestation that is chronologically secondary.

Inspiration, art, artist – so many words, hazy at everything, that keep us from seeing clearly in a field where everything is balance and calculation through which the breath of the speculative spirit blows. It is afterwards, an only afterwards, that the emotive disturbance which is at the root of inspiration may arise. It is this chain of discoveries, that give rise to the emotion – an almost physiological reflex, like that of the appetite causing a flow of saliva…

Tradition is entirely different from habit, even from an excellent habit, since habit is by definition an unconscious acquisition and tends to become mechanical, whereas tradition results from a conscious and deliberate acceptance. 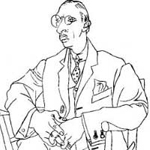 A real tradition is not the relic of a past that is irretrievably gone; it is a living force that animates and informs the present. Far from implying the repetition of what has been, tradition presupposes the reality of what endures.

Brahms was born sixty years after Beethoven. From the one to the other, and from every aspect, the distance is great; they do not dress the same way, but Brahms follows the tradition of Beethoven without borrowing one of his habiliments. For the borrowing of a method has nothing to do with observing a tradition. “ A method is replaced: a tradition is carried forward in order to produce something new.”

The very act of putting my work on paper, of, as we say, kneading the dough, is for me inseparable from the pleasure of creation. So far as I am concerned, I cannot separate the spiritual effort from psychological and physical effort; they confront me on the same level and do not present a hierarchy.

The idea of work to be done is for me so closely bound up with the idea of the arranging of materials and of the pleasure that the actual doing of the work afford us that, should the impossible happen and my work suddenly be given to me in a perfectly completed form, I should be embarrassed and nonplussed by it, as by a hoax.

A mode of composition that does not assign itself limits becomes pure fantasy. The effects it produces may accidentally amuse but are not capable of being repeated. I cannot conceive of a fantasy that is repeated, for it can be repeated only to its detriment. The creator’s function is to sift the elements he receives from her [imagination], for human activity must impose limits upon itself. The more art is controlled, limited, worked over, the more it is free.

As for myself I experience a sort of terror when, at the moment of setting to work and finding myself before the infinitude of possibilities that present themselves, I have the feeling that everything is permissible to me. If everything is permissible to me, the best and the worst; if nothing offers me any resistance, then any effort is inconceivable, and I cannot use anything as a basis, and consequently every undertaking becomes futile.

What delivers me from anguish into which an unrestricted freedom plunges me is the fact that I am always able to turn immediately to the concrete things that are here in question. I have no use for theoretic freedom. Let me have something finite, definite – matter than can lend itself to my operation only insofar as it is commensurate with my possibilities.

All art presupposes a work of selection. Usually when I set to work my goal is not definite. If I were asked what I wanted at this stage of the creative process, I should be hard pressed to say. 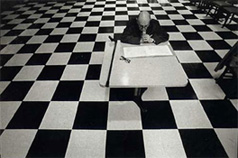 In the course of my labors I suddenly stumble upon something unexpected. This unexpected element strikes me. I make a note of it. At the proper time I put it to profitable use.

The faculty of creating is never given to us all by itself. It always goes hand in hand with the gift of observation. And the true creator may be recognized by his ability always to find about him, in the commonest and humblest thing, items worthy of note. He does not have to concern himself with a beautiful landscape, he does not need to surround himself with rare and precious objects. He does not have to put forth in search of discoveries: they are always within his reach. One does not contrive an accident: one observes it to draw inspiration therefrom. An accident is perhaps the only thing that really inspires us. A composer improvises aimlessly the way an animal grubs about. Both of them go grubbing about because they yield to a compulsion to seek things out.