The Institute of Contemporary Music Performance (ICMP) and Shure are delighted to announce the launch of the 2010 Shure Songwriting Award. Previously known as the Shure Creative Award and supported by Amy McDonald and K.T. Tunstall, the competition will be judged this year by the sensational singer/songwriter, Paloma Faith.

Paloma has taken the music world by storm this year releasing her debut album “Do You Want the Truth or Something Beautiful?” With the release of her first single ‘Stone Cold Sober’ being brought forward a month early after UK radio leapt on it with such enthusiasm, she is proving herself to be a major new star!

So, if you are a singer/songwriter looking to emulate Paloma and make a career out of your talent, why not take part in this year’s award competition? First prize is a unique opportunity to attend, free of charge, the fantastic one-year Professional Diploma in Songwriting course at the ICMP, Europe’s leading school of modern music, worth over £5,000! And in addition, two runners up will win some amazing Shure gear.

Studying at the ICMP, you will be able to take part in regular live showcase events, professionally develop your talent and have direct access to leading industry professionals. The winner of last year’s award, Zemmy, has already played and performed at a range of high-profile London venues and has supported talented singer/songwriter Amy Studt on part of her UK tour.

To enter, all you have to do is upload an original song to the award website before April 2nd 2010. A combination of an expert panel of judges plus public voting will select a top 8 and then Paloma will be making her selection for this year’s winner! Commenting on the award, Paloma said:

“I’m really excited to be involved with the judging of the Shure Songwriting Award with the ICMP. I think that competitions like this are important to help nurture and support new talent!”

This could be your chance – it could be your song chosen this year! For further details on entry guidelines, terms and conditions or for further information visit the award website www.shuresongwritingaward.com or contact the ICMP directly on:

The Event: Make Music NY is a unique, free outdoor celebration called “the largest music event ever to grace Gotham” (Metro New York). As part of the third annual festival, a new addition called “Mass Appeal” brings together hundreds of musicians forming ensembles of one type of instrument, including clarinets, french horns, ukuleles, hub caps, violas, accordions, saxophones, and more, that anyone can join in on.

These musicians will use the winning “musical handshake” to greet one another throughout the day, beyond bands of instruments, with the hope that momentary handshakes will turn into longer, improvised musical conversations. In the evening, the composition will receive its public premiere at the “Mass Appeal” afterparty in Central Park.

The winning musical handshake will be selected by a panel of distinguished judges (including Bill Bragin of Lincoln Center and Jeanette Sarkisian Wagner of NY City Center), and announced in late May, giving one composer the honor of a Mass Appeal premiere on June 21st.

• A musical handshake is a short melody, up to 10 seconds long, consisting of two phrases, so that two musicians can use it to greet each other with a call and response.
• Nearly all instruments and all musicians – from amateurs to professionals – should be able to play the musical handshake.
• No more than two submissions per composer will be accepted.
• Entries are due by midnight on Friday May 1st, 2009.
• Entries must be submitted in standard musical notation.
• Please e-mail submissions as PDF attachments to musicalhandshake@makemusicny.org

• Include your name, address, phone number, and email address on the same page as your composition. (Judges will not see this information when choosing a handshake.)
• Participants must be residents of the New York City area and in attendance on June 21st.
• By submitting a musical handshake, you affirm that the composition is your own, and agree that, if selected, your submission will become the property of Make Music New York, Inc.

For further information about the Musical Handshake or about Mass Appeal, please contact Elizabeth Ferguson, Mass Appeal Coordinator, at eferguson@makemusicny.org or at (510) 316-3061.

I had heard about Doggiebox some months ago from a friend, 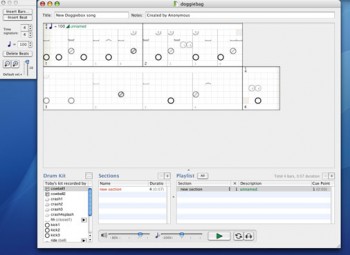 and at the time I had the intention of finding more about it, but after a couple of days, I forgot to do so. Until a week ago…

Doggiebox is a drum machine application for Mac OS X that lets you create and manipulate percussion-based songs. What I really like about it is that all sounds are fully customizable. This means that you can create or record your own kits. For example, you can record your friend’s drumset (or your own if you have one) and create a kit with each of those sounds in Doggiebox. You can even create kits of “non-instrument” sounds (for example kits created with your voice, your kitchen pots, etc.). There are three things that make Doggiebox to me a very successful drum machine application. One (in no particular order), it’s only $39 dollars. Two, its ease of use. I was able to create a simple beat after minutes of installation. And three, you can create drum parts that sound pretty real.

This last thing is done by having different versions of the same instrument or variants within a kit:

“Some instruments in a drum kit can be played in several ways, or have their characteristics altered by the drummer, in order to produce different sounds. For example, a hi-hat can be played open or closed; a ride cymbal may be hit on the edge, or on the bell, or stricken like a crash; a snare drum might be hit with a rimshot. Such distinct sounds associated with the same instrument are referred to as variants.”

And by being able to change drum velocity:

“To give texture and realism to your percussion it is usually desirable to perform hits at different volume levels, as a human player would do in real life. Fortunately this is easy to control on a sound-by-sound basis.”

Doggiebox is a MAC only application. Songs of unlimited length can be edited in any number of tempos and time signatures. When you feel the drum part is ready, you can export it to one of a dozen file formats including AIFF and WAV, for use in other audio programs, or play back in realtime to a MIDI device. I’ve had Doggiebox for a week, so I’m sure I’m missing other features (so feel free to comment about your experience with it, good or bad). I still believe there is nothing like having a good drummer available to record your songs. Unfortunately and for various reasons, this is not always possible. Feed your Doggiebox when you can’t get one.

(I called that one “Doggie Bag”, a short beat I created with Doggiebox so you can get an idea of what you can do. I used GarageBand afterwards to add a little reverb and a bit of echo). 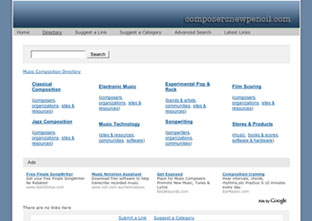 If you are a composer, songwriter, etc., please feel free to submit your site(s) or your favorite music composition related website(s). Our intention is to build a targeted and quality content directory. All links will be personally reviewed for consideration. The main categories include: classical composition, electronic art music, film scoring, jazz composition & arranging, songwriting, experimental pop & rock, music technology and finally stores & products. Subcategories include: composer and artist sites, resources, communities and organizations among others. New categories can also be suggested.

The directory is brand new, so some categories do not contain links yet. All feedback is welcome.

Thom Yorke is the lead singer and songwriter of the band Radiohead, the English rock band that has been often been praised as one of the most distinct bands of this generation. OK Computer (1997), pushed them to greater attention, and has been acclaimed as a milestone record of the 90’s. With their albums Kid A (2000), and Amnesiac (2001), the band reached their peak global popularity, even as their music (with influences ranging from electronic music to jazz) became less conventional. The band has even had an impact in the contemporary jazz world scene, where musicians like Brad Mehldau and Chris Potter have incorporated Radiohead’s songs into their standard repertoire. END_OF_DOCUMENT_TOKEN_TO_BE_REPLACED