Classical Music News
The great Russian cellist, dies at age 80. Rostropovich entered the Moscow Conservatory in 1943, at the age of 16, where he studied not only the piano and the cello, but also conducting and composition. 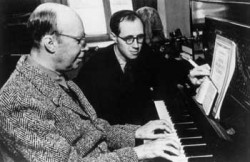 Among his teachers were Dmitri Shostakovich and Sergei Prokofiev. In 1945 he came to prominence as cellist when he won the gold medal in the first ever Soviet Union competition for young musicians. Rostropovich was a huge influence on the younger generation of cellists. His talent also inspired compositions from numerous composers such as Shostakovich, Khachaturian, Prokofiev, Britten, Messiaen, Dutilleux, Bernstein, and Penderecki. Rostropovich’s health declined in 2006 and was admitted to a Paris hospital at the end of January 2007, but then decided to fly to Moscow, where he had been frequently receiving care. Obituaries cited sources stating that the cellist suffered from intestinal cancer, while other sources report, he re-entered the Blokhin Cancer Institute on April 7, 2007, and died on April 27, 2007 (picture: Prokofiev and Rostropovich. Moscow circa 1950).