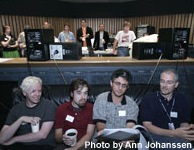 The Music Department at Columbia College Chicago offers the Master of Fine Arts degree in Music Composition for the Screen, one of the few advanced degrees in music scoring for film, television and other visual media in the United States. It is an interdisciplinary curriculum that draws upon five academic departments including: Music, Film/Video, Audio Arts & Acoustics, Theater and Television (Columbia’s film and video department is acknowledged as the largest in the world). The last semester is spent in Los Angeles, California and is the vital part of the program.

The classrooms in LA are located on the CBS Studio Lot in Studio City where students have access to the lot everyday just like working producers, directors, stars and craft personnel. The program tries to incorporate all related aspects of music production, from composing and orchestration to in-studio recording and mixing. It is a fifty-four credit hour program that can be finished within two years. Courses offered vary from History of Cinema, Film Orchestration, Directors and Composers, to Techniques of Synchronization and Conducting to Picture.

Andrew Warren Hill, the experienced music producer, composer, writer and teacher is the Director of the Music Composition for the Screen program. He is best known for his association with Disney’s many Academy Award winning musicals like The Little Mermaid, Beauty and the Beast, Aladdin, Dick Tracy, Pocahontas, The Lion King and James and the Giant Peach, among others. ‘I’d like for this program to be a model,’ says Hill of the new MFA, ‘and I know that Dick Dunscomb [Department Chair] and Dr. Carter [Columbia’s president] share that goal. Filmmakers and other creators of visual media are desperate for composers who understand drama, and I believe we can develop them at Columbia. In fact, I’m not sure there’s another school in the country that could to this as well. I’m tremendously grateful for the support that people like Bruce Sheridan, Mike Niederman and Doug Jones have lent this vision.’

The highly selective admissions process is open to candidates who hold undergraduate degrees in music, sound design, music composition and a range of other artistic disciplines. Faculty: Cliff Colnot, Paula Froehle, Doug Jones, Gustavo Leone, Ilya Levinson among others. (Click here to view the suggested program of study for the MFA Music Composition at the Columbia College Chicago. Click here to listen to an audio sample from an MFA Music Composition for the Screen candidate).